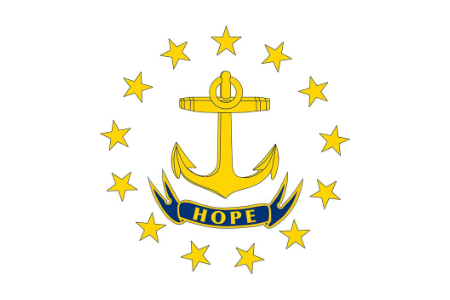 It’s been a while since I did a Friday Flagging post, and I wanted to focus on something that came up this week. Boston Globe reporter Brian Amaral tweeted that his flag of Rhode Island had fallen down during this week’s storm, and there was a detail on his flag that struck me as wrong:

If you haven’t spotted it, Amaral’s flag has a yellow border on it, meaning it likely looks something like this:

So, as I pointed out to Amaral on Twitter, this version of the flag of RI is wrong. And I bring it up because I’ve actually seen this design being used a fair amount (by people who are deeply involved in the civic life of this state). The above is not the design of the Rhode Island flag. RI state law, § 42-4-3, is pretty specific about the flag’s design (along with a host of other features):

The flag of the state shall be white, five feet and six inches (5’6″) fly and four feet and ten inches (4’10”) deep on the pike, bearing on each side in the center a gold anchor, twenty-two inches (22″) high, and underneath it a blue ribbon twenty-four inches (24″) long and five inches (5″) wide, or in these proportions, with the motto “Hope” in golden letters thereon, the whole surrounded by thirteen (13) golden stars in a circle. The flag shall be edged with yellow fringe [emphasis mine]. The pike shall be surmounted by a spearhead and the length of the pike shall be nine feet (9′), not including the spearhead.

So, there’s nothing about a yellow border, but there is a bit about yellow fringe. And this is where the above design originates from. See, in June of 2010, a Wikipedian uploaded a version of the RI flag that represented the yellow fringe as a yellow border:

He left a note that, according to the RI.gov website, the fringe was “a must.” We can use the Wayback Machine to see that neither the text nor image for the flag entry have been updated in the more than a decade since (no one’s even corrected the inconsistent double-spacing in the paragraph that describes the flag). That entry merely reiterates RI’s flag law.

As far as I know, RI’s flag was the only state flag to ever get this sort of digital representation of its fringe. For instance, Maine’s flag law also states that their flag is supposed to have a fringe, but no one ever represented that on Wikipedia. It’s an unnecessary addition; the nine foot pole with pike head are also prescribed in RI law (you do see the pike head a fair amount in official capacities), but no one has ever represented the flag with those on Wikipedia.

This gets to a major problem with how Wikipedia influences civic design. You see, most people, looking at this image, do not realize that yellow edge is not a border but supposed to represent fringe. And if you’re a flag manufacturer, looking to sell flags to people who want to buy them (at, I assume, an affordable price), you may not look too closely at what the design of the flag you’re printing is. You might just Google “flag of Rhode Island” which between June of 2010 and May of 2020 would’ve shown you a flag similar to the one above as the first result (since it was pulling from Wikipedia), with a yellow border on three sides. You might also decide that printing the flag at its legal 5’6″ x 4’10” size is a little ridiculous, and opt for a more standard sizing, like 3′ x 5′ or 4′ x 6′. And many Rhode Islanders just aren’t going to know what exactly their flag is supposed to look like, and when a flag shows up with a yellow border on three sides, they’re going to be perfectly happy. And so a decision by a single person on the Internet in 2010 influences the design of the state flag for over a decade.

This has mostly occurred outside of the official state use, though. In most official capacities, we see this execution of the flag used:

This version is found only on Encyclopedia Britannica (whether it’s an official State of Rhode Island-owned image or not, I don’t know, but it’s this image you see in most state and municipal capacities).

We have a very odd situation in which the State has its official emblems, and its own archives documenting those emblems, but the digital representation of the State’s emblems are essentially decided by a bunch of random Wikipedia image creators. A mistake made in 2006 (placing the anchor’s ring outside of the anchor’s shank instead of through it) can last for 14 years. A decision to represent fringe as a border can cause errors for over a decade.

This isn’t unique to Rhode Island; Wikipedia inadvertently influences the design of flags and civic emblems all over the world. But the State has the ability to correct this. Somewhere in the bowels of state government is a computer that holds the “official” files that our state emblems are printed with. It should be relatively easy to upload those on Wikipedia and provide some modicum of control over how our state gets its visual identity defined.

Or else, we can leave it up to random Wikipedia users.

For more on how Wikipedia influences civic design, Rhode Island in particular, see this thread: