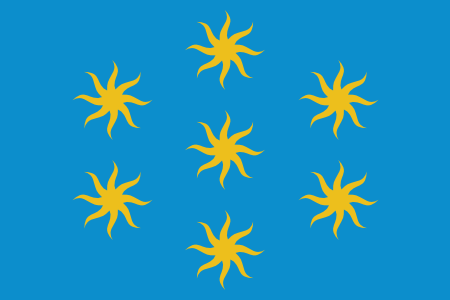 Each week in 2020, I examine the flag and associated symbols of a town or city in Rhode Island. I look at the history of the town, and then create digital versions of the symbols if needed, before creating sample redesigns for the the flag. This week, we go Portsmouth, the third English settlement in the state, and the first truly independent of Providence.

Prior to the arrival of the English, Aquidneck Island and the other islands had been conquered by the Narragansetts in a war against the Wampanoags in a war that established the Narragansetts as the hegemonic power in what was to become Southern New England.

Before we get to Portsmouth proper, let’s talk about Prudence Island or Chibachuwesa, which was gifted by the Narragansetts to John Oldham, an exile from Plymouth, in 1634. Oldham, whose 1636 death on Block Island touched off the Pequot War, never took up residence, and the island was sold by the Narragansetts to Roger Williams and John Winthrop of Massachusetts in 1637.

In 1638, a group of supporters of Anne Hutchinson from Massachusetts, were seeking to establish a settlement of religious freedom somewhere in New Jersey. Instead, Roger Williams convinced the group’s leaders, John Clarke and William Coddington, to settle on Aquidneck, and secured the settlers a grant from Narragansett sachems Canonicus and Miantonomi (the English claimed they purchased the island outright, but the Narragansetts claimed they were merely granting use of the island). In 1638, an enlarged group (presumably including Hutchinson since her husband is listed among them) signed a compact incorporating into “a Bodie Politick” and submitting themselves to God. They called their settlement Pocasset after the Wampanoag settlement across the river in what’s today Tiverton. They also ordered a meeting house, but never actually built it. However, despite lacking a place to practice democracy, the town uses the compact, now called “the Portsmouth Compact of 1638” as its claim to be the birthplace of American democracy.

In true Rhode Island fashion, the compact lasted less than a year. The arrival of Hutchinson ignited a power struggle for the colony, and Coddington and his followers moved to the opposite end of the island. The island was split in half, and Coddington’s half became Newport, and the remainder was governed by William Hutchinson as “Portsmouth” after the town in England. Portsmouth was given the islands of Patience and Prudence soon after its formation.

Despite the controversy that led Portsmouth to be founded being a schism among Puritans, the Portsmouth, like a lot of Rhode Island, had a lot of Quaker settlers early on, who were important in establish its first house of worship, and its earliest education. In fact, the founder of Quakerism, George Fox, actually visited the town and Aquidneck in 1672, prompting a 68-year-old Roger Williams to row from Providence for the chance to debate him (the nondenominational Williams thought the Quakers were heretics). Fox never answered Williams’ request for a debate, and left before he arrived (Williams debated other Quakers).

The Revolutionary War caused significant disruption to Portsmouth. The occupation of Aquidneck disrupted trade in Newport, eliminating a market for Portsmouth’s agricultural goods. Quite a number of residents departed, never to return. However, two major events occurred. First, Americans under the command of William Barton managed to sneak onto the island and capture the British commander Richard Prescott, forcing him out of his headquarters in Portsmouth half-dressed. Second, much of the action of the Battle of Rhode Island (a British victory) took place in Portsmouth.

After the Revolution, Portsmouth didn’t see the industrial boom that occurred elsewhere in Rhode Island, for the same reason the rest of the island towns didn’t: a lack of suitable rivers to power mills (though one of the few mills built in Portsmouth made cheap cloth to clothe slaves). The Quaker Meeting school failed, and its treasurer, one Moses Brown, took its account, added some of his own money, and started a new school in Providence which today bears his name.

There were two attempts at a minerals industry. An attempt to mine coal was made repeatedly, but coal deposits in Portsmouth were of poor quality. A copper smelting operation was also set up by the coal mines.

Transportation has long a shaped Portsmouth. A ferry to Bristol was one of the first things established in the town, and lasted the longest before being replaced by the Mount Hope Bridge. Bridges were repeatedly built over the Sakonnet River to Tiverton, the most famous being the Sakonnet River Bridge, but the only currently existing one is Fall River Expressway. In the late 1890s, an electric trolley was built between Portsmouth and Newport, and an amusement park was built at its Portsmouth terminus; the amusement park survived for about forty years before the Hurricane of 1938 destroyed it.

Portsmouth did not see much growth before the 20th century and the adoption of the automobile and later suburbanization (as well as the development of the Newport Naval Station). While, like other coastal and island towns, it did become a summer resort community, it was not as sizable as places like Narragansett or Newport. Mostly its population stayed just shy of 2,000 residents. Today, it has somewhere over 17,200 residents, with all of that growth occurring between 1910 and 2000. The last two decades have seen stagnation in terms of population.

Portsmouth is surrounded on three sides by water, and Middletown to the south. Portsmouth is also inclusive of Prudence Island, Patience Island, Hog Island, Dyer Island, Hope Island and either a portion or the entirety of what is either Gould or Addams Island in the Sakonnet River. There are also a number of smaller islands: three in the cove in the north of the town, and two beside Hope, including the evocatively-named Despair Island.

What has Portsmouth got now?

Portsmouth has a coat of arms.

Azure seven etoiles of eight points on[sic?] in an orle of six around the seventh. On a blue shield, seven eight-pointed gold stars, six in a circle around the seventh. This device of six stars around a seventh was used on the seal of the Town Council of Portsmouth as early as 1676. The colors are taken from the arms of Portsmouth, England, viz.: Azure a crescent within its jaws an etoile or eight points or.

The town was named for Portsmouth, England.

As it says above, these are drawn from the arms of Portsmouth, England:

However, the origin of Portsmouth, England’s arms are worth discussing. The belief is that they derive from the arms of William Longchamp, who ruled England in Richard the Lionheart’s absence during the Third Crusade. However, Longchamp used a version of Richard’s arms, and it’s not clear why Portsmouth wouldn’t have used those same arms. However, Richard’s seal bore the star and crescent, and there are two theories on its origin. First, that it relates to the star Regulus in the constellation Leo, which is also the Cor Leonis – the “Heart of the Lion” – and thus a visual pun on Richard’s nickname. It also possible that Richard borrowed it after seeing it used by the Eastern Roman (aka “Byzantine”) Empire; who married a star for the Virgin Mary with the crescent symbol of the goddess Diana after the conversion of Constantine the Great to Christianity. This would make it sort of spiritual kin to the arms and flags of Islamic nations who adopted the star and crescent as a result of the Ottoman conquest of the Byzantines.

Portsmouth’s stars apparently influenced the early seal of Providence, which also adopted stars in 1680. According to the founder of vexillology, Whitney Smith, one theory for the origin of stars on the American flag comes from the fact that Rhode Island’s regiments used flags featuring cantons with stars, possibly in reference to Providence. However, it’s not clear if the flags of the Rhode Island regiments were created before or after Stephen Hopkinson designed the American flag.

Portsmouth uses these arms on its seal, and in a pleasing version on signage, which, like a lot of Aquidneck Island signs, was made by Liptak Signs.

They also appear on the inbound side of RI-24 as you cross into the town from Portsmouth:

Portsmouth has a town flag, I think, and it looks… good!

John McDaid gave me permission to use these photos from the 378th anniversary of the Portsmouth Compact, and you can clearly see it in the background.

In John’s recollection, it’s just the stars on the flag. So, as best we can tell, Portsmouth uses a version of its arms adapted to the format as a flag, and with no text! It’s very plausible that Portsmouth has best town flag in Rhode Island, in my estimation. They just need to use it a bit more (seriously, the above images may be some of the only images of the flag available online).

So, in symbolic inventory, Portsmouth has its arms in use, a seal it uses, and a well-designed flag that adapts those arms. That puts it well ahead of many of the other cities and towns in Rhode Island.

The seal seems fine, I was able to find quite a few sizes of it in clear resolution, so it seems like it’s something Portsmouth has access to.

So, here’s the flag.

It’s not exactly the same as the one in the photos, but I found I just wasn’t able to do that flag justice digitally. Digital representations of flags have a way of taking on a life of their own, and it looks like Portsmouth has a good flag, so if I botch it, I don’t want that to reflect poorly on Portsmouth. I felt like the sharper estoiles work pretty well. And they technically aren’t incorrect; it’s generally up to the flag designer how to draw the estoiles, since the only specifications are their color (gold/yellow) and the number of points (eight).

Look, I’m not really going to do better than this. The perfect is the enemy of the good here. That said, let’s put some entries on good’s enemies list.

Yep, Design 1 is not a redesign. That’s the the flag I just showed you! But it’s good, it does everything a flag is supposed to, while still maintaining a deep historical connection with the town. Portsmouth has used these seven estoiles since 1676. This would’ve been Design 1 even if Portsmouth had used an SOB, so I think it’s fair to put it in the poll at the end. If it ain’t broke, don’t fix it.

That said, a slight problem with Portsmouth’s flag is that the meaning of the number seven has been lost. It’s possibly a reference to Portsmouth’s seven islands, but to get to seven, you have to count in a very specific way.

This design honors the capture of Lt. General Richard Prescott (the second time he was captured by American forces). Prescott’s rank was signified with six chevron laces in two groups of threes on his sleeves, so his rank is recognized here on the hoist side of the flag.

One final design, based on the flag of Rhode Island, replaces the thirteen stars on the Rhode Island flag with the seven estoiles from the Portsmouth arms. The purpose of this flag is to signify that Portsmouth was part of the actual Rhode Island, for a few years basically an independent colony, and among the founding towns of the colony. The anchor could also stand for Aquidneck Island itself, or be a reference to the “port” in “Portsmouth” as anchors often denote ports on maps.

In summary, Portsmouth has a good flag. They should bring it out more, and make it much easier to find.

Join me in 1-2 weeks when I take on Providence’s flag, my hometown.