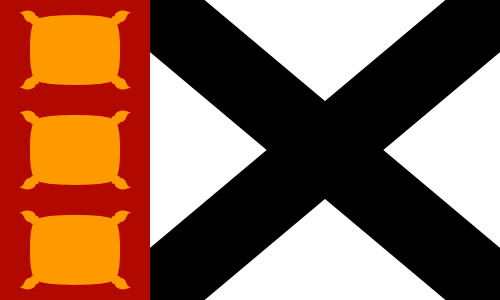 I took a brief hiatus last week from writing about the flags of RI’s cities towns because it felt to me like our collective energies needed to be focused on systemic racism. While I do not feel that our attention and energy should be less focused on that, I also think there’s space to return to previous pursuits.

If, however, you’re interested in the way flags and systemic racism interact, I suggest this article going over the origins of Black nationalist flags, among which are the UNIA flag now known as the Pan-African Flag, the Nation of Islam flag, and the flag of the Black Panther Party.

Anyhow, on to this week’s entry on Johnston.

The political entity of Johnston was part of Narragansett territory until the mid-1600s. There’s evidence it was used for quarrying by the Narragansetts (something that would be continued by the English and Americans). Roger Williams’ original grant for Providence mentions Neutaconkanut Hill as a boundary. At some point, Providence’s lands expanded to include areas seven miles west from Fox Point, and thus this places the borders of modern Johnston within the “Inlands” of Providence (as opposed to the “Outlands” of modern Burrillville, Glocester, Foster, and Scituate).

In 1731, three towns were created out of Providence, and Johnston remained with the rump Providence. Over the course of the 1750s and 1760s, three more towns were created out of Providence, of which Johnston was the second. On March 6, 1759, Johnston was incorporated and named after then-Attorney General Augustus Johnston. This makes Johnston one of two towns (the other being Burrillville) named after contemporary Attorneys General of Rhode Island.

What makes Augustus Johnston interesting is that it appears he was a Tory (pro-British). He was one of three stamp-distributors during the Stamp Act crisis; and as such was burned in effigy at a protest in Newport where the protesters became quite violent and destroyed the property of his fellow stamp-distributors (they were forced to take refuge on a British war ship). During the Revolutionary War, Johnston was ordered interned in South Kingstown, but somehow later was in Newport as a Loyalist administrator, moving with the British to New York when they pulled out of Newport, and then possibly on to South Carolina. He died in 1790, his properties confiscated and his wife and children destitute with claims brought against them. Keep in mind, this all started within six years of a town being named after him, so why Johnston remained “Johnston” is rather a mystery.

If you’ve followed this series, you can probably guess the rough outline of its development history just by looking at Johnston’s location on a map. Like many western towns, Johnston’s development is heavily concentrated in the east, especially along the Woonasquatucket River. Economic activity was centered around eastern textile mills and western farming. Johnston also was fortunate to be part of the turnpike boom that occurred in western Rhode Island towns, as a number of those turnpikes had to pass through Johnston to connect Connecticut towns with Providence, so a small economy was created to service travelers on the turnpikes.

Johnston was the birth place of Governor Samuel Ward King, who led the Charterite side of the Dorr Rebellion and was ultimately the victor.

Simmonsville in Johnston was probably the village with the most impact on Johnston’s ethnic character: mill owner B.F. Almy brought in a large number of workers from the Italian states. As of 2015, the Italian American Studies Association claims Johnston is the second most-Italian place in America. As an aside, Simmonsville was named for mill owner James F. Simmons, who was twice a U.S. Senator, resigning the second time before he could be expelled for getting $20,000 from two Rhode Island rifle manufacturers in exchange for securing them contracts during the Civil War.

After seeing prodigious growth in the late 19th Century, the southeastern portions of Johnston (the villages of Olneyville and Manton east of the Woonasquatucket) were annexed to Providence, leading to 56% decrease in the town’s population between the 1890 and 1900 Censuses. From that low point, Johnston grew more than six times over during the 20th Century as mass suburbanization took hold. As of 2019, it was estimated to have 29,471 people, the most ever in its history.

Besides having a large population with Italian ancestry, Johnston is probably best known in Rhode Island for being the location of the Central Landfill and more recently for a months-long battle with a turkey that was terrorizing locals.

What Has Johnston Got Now?

Johnston has a coat of arms:

Argent a saltire sable, on a chief gules three cushions or. On a silvershield [sic] a black diagonal cross, with three golden cushions on a red stripe at the top.
The town of Johnston was named for Attorney General Augustus Johnston, who came from Perth Amboy, N. J. The family of Johnstons residing there used these arms.

These are the arms of the Earls of Annandale and Hartfell, Scottish lords from the Clan Johnstone. As I understand it, Scottish heraldry doesn’t actually allow people who are not the primary title holders to use the arms without alterations, so I’m not certain the New Jersey Johnstons had any right to use it in this manner.

Regardless, Johnston uses these arms, as shown in this photo WPRO reporter Steve Klamkin tweeted in 2016.

Those arms, in black and white (in correct heraldic monochromatic hatching) with a helmet and mantling are likewise incorporated into the town seal:

I assume Johnston has a flag, because of the flag ceremony at gubernatorial inaugurations, but I have found no evidence of what it looks like. My guess is it’s the seal on a white bedsheet, but that’s just a guess. It’s possible it’s a blue field and not white. Maybe it’s something that’s really good. But it’s not evident.

Let me put it this way, I found the Johnston police color guard, who use the US Flag, the Rhode Island Flag, and (as best I can tell) the police patch on a white field.

The arms are relatively easy to do. At left you can see my design, and at right, the one I pulled from WappenWiki for the Lordship of Johnstone (a subsidiary title of the Earls of Annandale and Hartfell). The decision here is really how you’ll choose to draw the cushions and how thick you’ll make the saltire and at what angle it’ll come in.

For Johnston’s seal I chose Space Grotesk as the font, as that was closest font I have that matched the current seal’s capital N’s. Johnston is fascinating in that its seal seems to have been designed to for black and white applications, and yet the Town has added a gold band. The other issue I found is that all the town documents seems to have been scanned in from physical copies, so I had to pull the original from a secondary source (though it did match the seal on the town website).

With no hint of a flag anywhere, I’ll skip that aspect of digitization, and move straight to redesigns.

The simplest way to create a flag for Johnston is to adapt its arms. Shifting the arms 90 degrees counter clockwise allows us to set the chief along the hoist side of the flag, giving over the rest of the flag to the black saltire.

While I don’t think the Johnstone arms have a particularly meaningful connection with the Town of Johnston, I can’t deny it’s a good symbol.

Design 2 builds on the bones of the arms of Johnston but makes a couple of adaptations. First, black has been replaced by green, acknowledging Johnston’s agricultural history and making the flag’s colors the same as those of Italy. Finally, the cushions have been replaced by a single star, both representing America and the Stella d’Italia, a national symbol of Italy.

Drawing on Italian symbolism with the colors and star, this flag also uses crossed pickaxes to symbolize Johnston’s granite quarrying past. The “CJ” monogram stands for “Comune di Johnston” or “Municipality of Johnston” in Italian. As an added bonus, the font used is called “Garibaldi” – referencing the famous “Hero of the Two Worlds.”

This final flag draws upon the flag of the first Kingdom of Italy in the modern era, which has a distinctive layout that’s always fascinated me. Similarly, this flags relies on the Stella d’Italia, but it surrounds the star with ten dots for ten neighborhoods in Johnston (if there are more or less, the number can always be altered). This decision to represent the neighborhoods is based on the de’ Medici arms, which also appeared on the arms of the Duchy of Florence.

As is typical, I’m not from Johnston, and I’m not a person who frequents Johnston. If you have thoughts on better Johnston symbolism, let me know. I’m always glad to make alterations or create designs if people have thoughts about what flags should represent them.

As always, please vote in the poll.