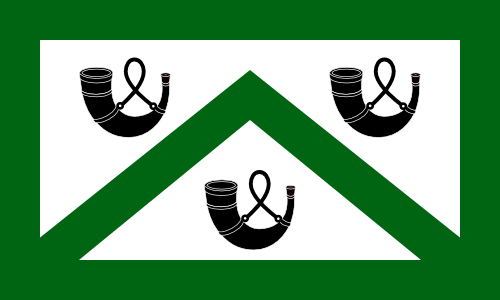 Each week this year, I’m taking a look at the flags (and other municipal symbols) of the towns in Rhode Island. This week, we look at the southwestern corner of Providence County: Foster.

Foster is a rural, heavily forested town (much of that relatively recent, most of the old growth was cleared by the early 1800s) bordered by other rural towns. It contains eleven hills, the highest of which is Jerimoth Hill, the state’s highest point, and probably the easiest hike among state high points (it’s actually fairly easy to walk right past it).

Foster is made up of six villages, with much of its original settlement (both indigenous and colonial) occurring along its two rivers. Prior to the arrival of the English, the town was the frontier between the Narragansetts and the Nipmucs. By 1659, the General Assembly authorized Providence to “buy out and clear off” the Indians, and a first purchase was made in the area. The area became known as the “Providence Woods” or the “Outlands”.

A few years later in 1662, another purchase claimed an area called “Wishquatnoqke” – today rendered “Westconnaug”. In typical RI fashion this led to a land dispute between the Providence Proprietors and the Westconnaug Company. However, it’s important to note that no English settlers would live in the area until over 40 years later, when RI rushed to settle people in the area due to competing claims with Connecticut. The first deeded settlement in the area occurred in 1714, and the area was dominated by farms and the classic gristmill and sawmill villages of the pre-Revolutionary Era. Among the early settlers were names like Hopkins, Dorrance, and Harrington (all of whom left a legacy on RI).

Until the 1730s, Providence administered the area, but by then, the rural Outlands found themselves at odds with Providence, so on February 20, 1731, the area was split into three towns: Glocester, Smithfield, and Scituate (which contained modern Foster). Scituate developed thanks to three factors: maritime industrial demands, roads to facilitate commerce between western Connecticut towns and the Rhode Island coast, and the lack of unsettled land elsewhere in RI.

By 1781, though, Scituate was chafing under the apportionment of the General Assembly prescribed by the colonial charter. After Scituate failed to succeed in an effort to change that apportionment, it requested to be split (in the math of the charter’s apportionment, this would double the area’s representation). Thus, it was split in half, with its western portion becoming a new town (a previous proposal had suggested a north/south split, which would’ve annexed a portion of Glocester to the new town). The new town was named Foster after one of the state representatives who drafted its bill of incorporation. Today, this would be a fairly suspect reason for creating a town (and indeed, the written reasons Scituate gave for its division were more mundane concerns about difficulty of travel and the like).

Namesake Theodore Foster turned out to be a vigorous supporter of the new town, beginning with his initial donation of a bookshelf, and thirty books to the town (eight of which were blank for record-keeping). Elected to the U.S. Senate in 1790 as one of RI’s first senators, Foster then took up residence in the town named after him. In short order, he established a post office, library, resolved the town’s border dispute with Glocester. He also created a turnpike between Hartford and Providence. Foster (the town) ended up being crossed by seven turnpikes, private roads (often incorporating previously public ways) to connect Connecticut and Massachusetts towns with Providence. Foster residents complained due to their loss of land, but mostly because the private roads were poorly maintained (the only known example of a private business tasked with maintaining a public good cutting corners).

Unfortunately, turnpikes were about the only thing Foster the town had going for it. In 1820, the year Foster the man would leave town to return to Providence, Foster’s population was recorded at its pre-20th Century high. Over the next hundred years, it would be reduced to just a third of its population. The first wave to leave were Revolutionary War veterans taking up land grants in New York and Vermont. Next, the whaling industry beckoned as well, drawing men to the sea. Finally, so did gold, as the Californian Gold Rush pulled even more.

Throughout, the Industrial Revolution continuously drained the town’s population. Foster (like Exeter, which we saw last week had a similar issue) lacked strong waterways by which to power industry. So, industry developed elsewhere in the state. Industry paid better than farming, and the cities and towns surrounding the industry were far more lively than rural Foster. Foster’s attempts at local industry couldn’t compete (combs and jewelry made from cow horns did not sell well). Foster turned instead to “market gardening” – supplying perishable food to local markets, since it could not travel across the country. Unfortunately, refrigeration wiped out that as well. There was a brief a boom when an electric railroad between Providence and Danielson, CT was built with Foster as a stop, but the creation of the Scituate Reservoir flooded a portion of the tracks, and the railroad folded. So did nearby mills. By 1920, Foster had less than a third the number of residents it did a hundred years before.

But with the railway dead, the age of the car began. Within a few years, Foster had its first paved road. The area became reoriented around being a “quaint” vacation spot for folks from Providence. With the Great Depression came the New Deal, and renewed investment in towns like Foster, and later, suburbanization. Foster’s population grew, and as of 2018, Foster was estimated to have its most residents ever.

My source for this is largely the RI Historical Preservation Commission’s report on Foster.

What Has Foster Got Now?

Foster was given a coat of arms by the Tercentenary Commission: 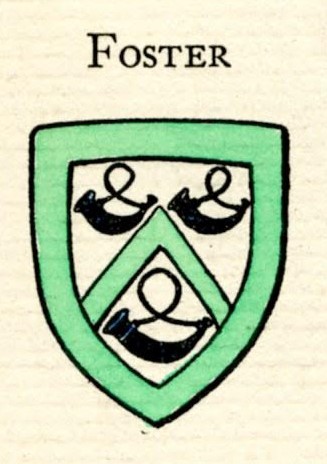 It’s emblazoned as such:

Argent a chevron vert between three hunting horns sable, with a border of the second. On a silver shield a green chevron between three blackhunting [sic] horns all within a green border.
Foster was named for Senator Theodore Foster, and the arms are the ancient Foster coat with a border for difference, on account of the fact that there is no evidence that Theodore Foster himself used arms.

So, in typical Tercentenary Commission fashion, rather than develop a local symbol imbued with local meaning (so far, our gold standard for this is Cumberland), the Commission opted instead to use the arms of the British Foster family (there are many different arms for the many different Fosters, but most are variations on this.

However, looking through the history and geography of Foster, the Commission seems to have picked a pretty good set of arms. Virtually every part of it could be construed to be representative of some aspect of Foster or its history or geography.

Foster uses these arms in their town seal.

Not a light the world on fire type of seal, but it mostly lets the arms do the work.

Foster apparently has a flag as well, which is the seal on a white field.

This is your standard seal-on-a-bedsheet, and it’s considered to be one of the worst forms of flag design. I’ve mentioned this point a lot, but seals are intended to be examined closely whereas flags are intended to be identified quickly. Putting a seal on a flag, in a format similar to hundreds of other flags, defeats the purpose of a flag.

Anyhow it seems fairly evident Foster doesn’t really have vector versions of any of this stuff. 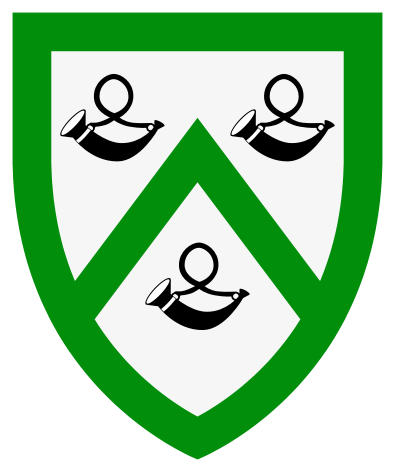 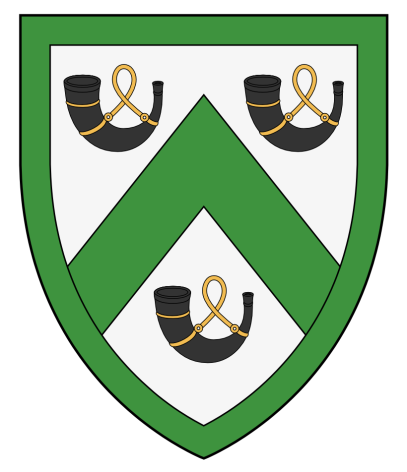 The first image uses my choice of colors and horns designed from the Tercentenary Commission image, the second uses assets from WappenWiki. Typically, chevrons are execute fairly thickly, but in most representations of Foster’s arms, you see a fairly thin chevron that’s about as thick as the bordure of the arms. Neither representation is wrong here, just different executions. I made a choice with the WappenWiki one to make the straps gold, to give some contrast to the horns.

The seal is just the arms surrounded by a circle with “Town of Foster” and the year of incorporation. Here, I’ve done this pretty faithfully, even replicating the horns that appear on the seal. The only thing I lacked was the odd font chosen, so I used Sans Merci Bold to approximate it. 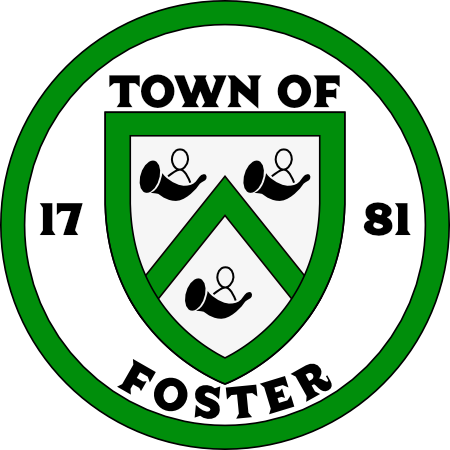 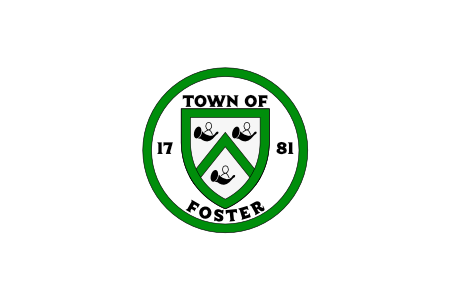 But I can certainly do better than this.

So far, these straight adaptations of arms have tended to be the winners in the poll, except in cases where the arms are quite bad. The WappenWiki horns were better than any that I drew, so those have been used here, with some adaptation to limit colors. I’ve also used a darker green. Though this was not the intended symbolism of these arms, the green can easily stand for the woodlands, the chevron for Jerimoth Hill, and the horns for hunting in Foster. You could even, as a joke, say the white is for the classic “no school Foster Glocester” snow day announcement by the late Salty Brine. 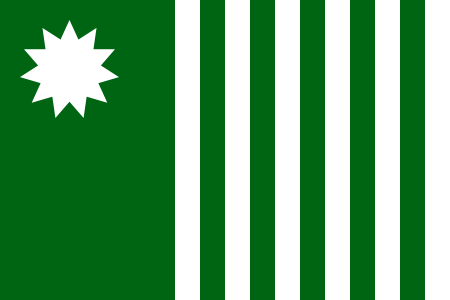 This flag uses just two colors, white and green, with green representing the forest cover of the town and white for its connection with the Rhode Island flag. The six white stripes stand for the six villages with the eleven-pointed star standing for the eleven hills. 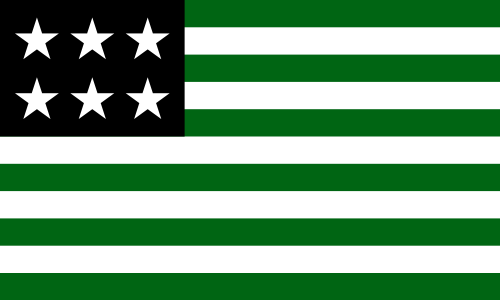 This uses similar logic as the flag above, but flips it so that it’s similar to the Stars and Stripes; with the six villages in the canton, and the eleven hills as the stripes. The use of the Stars and Stripes layout represents Foster’s place as the first town in Rhode Island incorporated after the outbreak of the Revolutionary War and de facto independence. 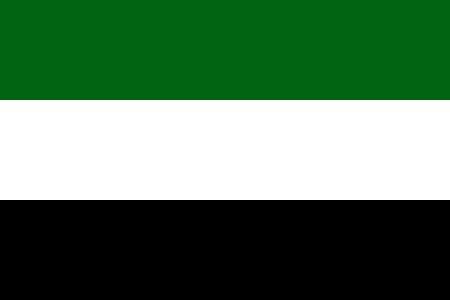 Tricolors never get any love in the polls, but I’ll keep forcing them on you, nonetheless. This Foster Tricolor draws on the colors of the coat of arms, and the three colors can represent the woodlands, winter snows, and the rocky earth of Foster. 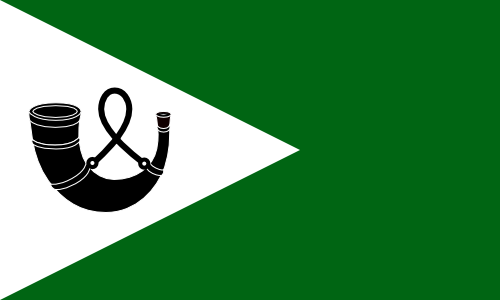 Finally, this flag uses just a single hunting horn as a hoist-side symbol for the town. The white chevron coming in from the hoist represents Jerimoth Hill, and the field of green is the woodlands. To me, this strikes a good balance between representing the arms, and a flag that looks like it should be a flag and is not merely an adaptation of a coat of arms.

As always, I am not suggesting that any one of these flags should become the flag of Foster. These are possibilities. I’m not from Foster, I have very little experience with the town, and would never think to prescribe a flag for a place. If you’re from Foster and have thoughts, you can always use the Contact Us page to get in touch (or tweet at me).

Flagging Friday continues next week, when we go north to Glocester. As always, vote in the poll.