Every Friday until November, I’ll be doing a deep dive into the flags (and accompanying civic symbols) of cities and towns in Rhode Island. The purpose of this exercise is to both shine a light on already-existing symbols and to offer ideas for improving municipal flags.

This week on Friday Flagging, it’s the northwest of Washington County: Exeter!

It is surprisingly difficult to find details about on online. The main resource for the history part of these posts has been the RI Historical Preservation & Heritage Commission reports, but the available document for Exeter is a preliminary report that doesn’t get much into the history of the area.

Early Republic Era maps show Exeter as a long rectangle, akin to other western RI towns like Coventry, Glocester, and West Greenwich. However, either due to better projections, better surveying, or some sort of boundary changes (I can only speculate) the town’s shape changed (as best I can tell from maps) sometime between 1838 and 1840 into more of a pot shape, with a large western panhandle connecting to an eastern quadrilateral.

This coincides with a loss of 38% of the population of the town reported in the 1840 Census, signalling to me this was an annexation of a populated area (or just unfortunate timing). This began a long decline of the area, until by the 1910 Census, the town only had 778 residents (down from its 1830 high of 2,883. However this was its nadir; during the 20th Century the town grew massively. By 1970 it reached a new population record. Today, the town likely is the most populous it’s ever been, the most recent Census estimate puts it above 6,500 residents.

The area the town encompasses was to become disputed territory between the English colonies of Rhode Island, Massachusetts Bay, and Connecticut. The disputes arose largely due to the Pequot War, when the latter two colonies tried to extend claims to Pequot lands into areas Rhode Island also claimed. All these lands were claimed and inhabited by the Narragansetts, who had joined with the English against Pequot.

The dispute was settled due to three key events: First, in 1665, royal commissioners sent to resolve boundary disputes turned the entire area into “King’s Province” and gave to Rhode Island to administer temporarily. Then, all the northeast colonies were amalgamated into the Dominion of New England. When that was overthrown, Rhode Island seized control of King’s Province. Finally, in 1703, Rhode Island and Connecticut came to an agreement about the border, and it’s held ever since.

Exeter was formed in 1742 from North Kingstown. I’m unable to find a reason for this, but I assume it’s for the same reason other western RI towns were formed: it just became too difficult for westerners to travel east for town meetings. Its most lasting impact in popular culture is the 1892 Mercy Brown “vampire” incident, in which a tuberculosis victim’s corpse was exhumed, her heart and liver burned, and the ashes fed to her ailing brother, who perished two months later. It’s possible that the incident somewhat influenced Bram Stoker’s novel Dracula, but the timeline makes that seem unlikely.

Exeter is split down the middle by Ten Rod Road, which was created to connect Connecticut farms with Wickford in North Kingstown. The road is so named for its width, 165 feet (a rod being 16.5 ft). The state reports that there are seven villages in Exeter: Arcadia, Austin, Black Plain, Fisherville, Lewis City, Liberty, and Millville.

What has Exeter got now?

Exeter, under the Tercentenary Commission, was given a coat of arms.

Per fess gules and sable, a triangular triple tower castle or. Shield divided horizontally red and black, with a golden castle. These arms are those of Exeter in England, “Per pale gules and sable a triangle triple towered castle or,” differenced by changing per pale to per fess.
Exeter was named for Exeter, England.

This is the full achievement of arms of Exeter, UK:

Exeter uses its arms as a town seal, unadorned. A few years ago, Exeter Town Clerk Lynn Hawkins was kind enough to send me the seal and the flag. Here’s what the adopted arms look like:

I followed up with Ms. Hawkins about this, and she sent me the notes from the adoption of the arms. 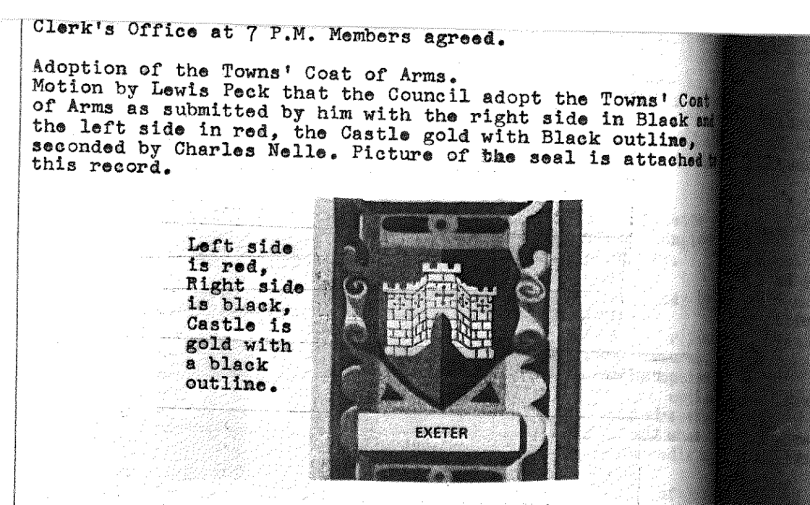 So Exeter, Rhode Island adopted the arms of Exeter, England undifferenced, despite the intentions of the Tercentenary Commission. Why this happened is unclear to me, whether it was an honest mistake by Peck, or if the Council just didn’t like the per fess split. Possibly, Peck was just confused by what “divided horizontally” means which is actually pretty unclear when you think about it.

They then placed them on the flag:

We’ve seen this same basic layout before: this is basically the same as Burrillville, but with the town name on the bottom instead of the top.

One final thing to note is that you’ve seen multiple castle designs. The town seems to have two versions it uses: one for digital applications as above, and then one very similar to the flag, used on print applications, as seen in this screen grab from a public notice.

And as you can see, even that’s not quite the same.

Having two versions of the arms presents a weird challenge. Which should we go with? It would fit in with towns like Coventry to go with the differenced design, but then, Exeter adopted and uses the undifferenced version.

I, of course, did versions of both. 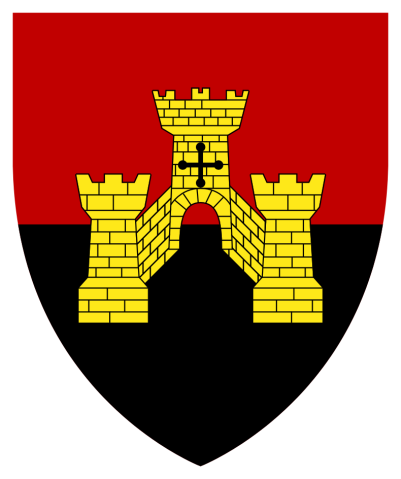 Again, these are just executions (mine is based off of the Tercentenary Commission drawing, the WappenWiki assets are from the arms of the Kingdom of Castile). Exeter does present a new wrinkle by also having its arms double as a seal. I was given those in a .doc file, which makes me worry there isn’t a vector version readily available. So I’ve recreated the version I was given here: 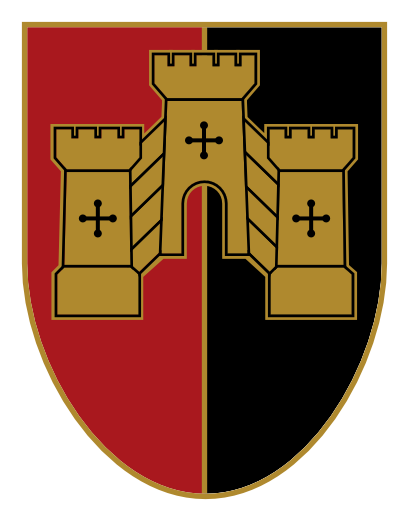 On that version, it’s unclear whether the crosses are supposed to be cross pommy like this (having a little knob at the end), but it’s common in most depictions of the Exeter castle, so I’ve carried it over here.

And here’s a replication of the town flag: 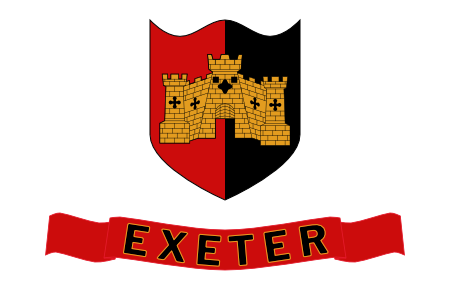 Fairly straightforward. Based off the image I was sent, I’ve tried to get the castle as close as I could. I’ve chosen a different font than the one displayed for “Exeter”. This time I went with Libre Franklin. Though it’s important to remember that a flag should not say the name of the place it represents. That represents a failure of flag design.

Finally, Exeter doesn’t really have a true seal, it just has its arms. While these are similar things, they are somewhat different. So let’s give the town a proper seal it can use on official letterhead:

In this case, I’ve gone with a font called Lovelo, which I think balances the formality of the town name on the flag with the more unique fonts it uses online and on paper (though, as a free font, it requires a lot of kerning). The black and white version uses the heraldic representation of red (though it doesn’t use the heraldic representations of black or gold). I’ve also altered the castle image, and I’ll be using this version from here on out.

So now that we’ve got that sorted, let’s go on to see what kind of redesigns are possible. 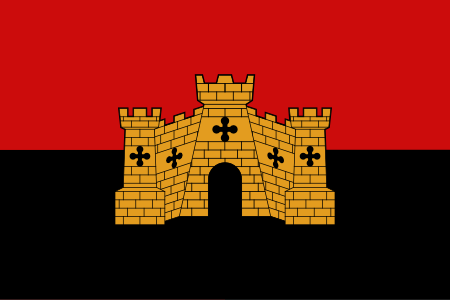 This very simple, but timeless design takes its inspiration from Ten Rod Road. Its center line represents the road, while the stripe dimensions are created by multiplying 16.5 pixels by seven (the number of villages). The color arrangement allows it to avoid being too close to the German or Belgian flags.

This similarly simple set of designs is intended to represent the seven villages, with alternating stripes. I finished the first version (3a), and then was immediately reminded of the (not always true) rhyme about differentiating between coral snakes and milksnakes. So, I made a milksnake flag as well (3b).

This flag uses the division of the field from the Tercentenary arms to represent Ten Rod Road, while using the castles to represent each of the villages.

Finally, this last flag is intended to represent the natural spaces of Exeter (and to break with the monotony of red, black and yellow). My wife informed me that between the various conservation organizations, Exeter has the largest portion of its land under conservation, and the green here represents that. Once again, a repetition of the seven motif for the villages, with the wide Ten Rod Road down the middle, but this time, I’ve broke the horizontal space with the two rivers.

Again, there aren’t a lot of easily available public resources for Exeter, so I repeated a lot of symbolism over and over. I want to reiterate: this is a personal project, which I hope can offer a glimpse of the path forward for municipalities. In real life, you’d want to have a much different process, with lots of local input, and a lot of more time than a week spent thinking about what makes a place unique. I’m sure Exeter has lots of opinions about what its flag should look like.

Housekeeping from last week: no one pointed this out to me, but I used “East Greenwich Flag Voting” as the header of the poll for East Providence. This is because I copy the documents and swap out the images, and I forgot to make the change to the header.

If you have thoughts about this week, or future weeks (I’m going alphabetically), you can use the Contact Us form.

The poll is here: