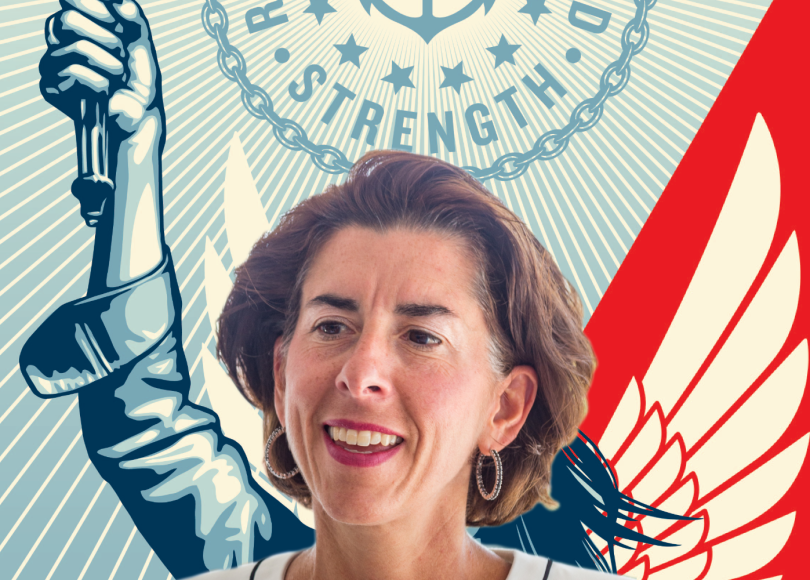 Tuesday morning, we got to wake up to this:

The RI Center for Freedom & Prosperity, the state’s premier advocacy organization for liberty, denounces in the strongest permissible terms the totalitarian nature of the piece of art that Governor Raimondo chose to put forth as “hope” for the Ocean State’s struggles against the Covid-19 pandemic.

There are a lot of oddities in that sentence. For instance, that the Center is “the state’s premier advocacy organization for liberty” and not, say, the ACLU, which actually defends liberty. Second that there was something totalitarian about the Shepard Fairey work. Fairey’s work does play up communist imagery, but as I pointed out in a meandering Twitter thread, it also plays up John Carpenter’s 1988 film They Live and the late professional wrestler André the Giant. Or the use of the phrase “strongest permissible terms” instead of the more common “strongest possible terms”.

Let me also point out that there’s something entirely stupid about an organization claiming to be “advocacy organization for liberty” denouncing a piece of art intended to help artists. Seriously, the Journal‘s Paul Edward Parker relates that Angel of Hope was created to accompany the launch of the RIArts.org website, a site built to connect artists and residences with resources and performances in this time of social distancing.

I get that the Freedom Center is finding it hard right now. Since everyone is focused on the slowly unfolding actual catastrophe of the COVID-19 pandemic, no one has time to listen to the Center’s plans to bring back flavored vaping products (that’s really part of their pandemic plan). With no legislatures meeting, there’s no policymakers to listen to their dark warnings of socialist creep. The only way to get attention right now is to kick up enough dust that someone mistakes it for smoke. I’m probably not helping matters by writing this post.

The Fairey work is not a symbol of totalitarianism (the Center placed it alongside pro-Stalin and pro-Hitler posters, but c’mon, anything looks evil when it’s accompanied by Hitler and Stalin). Gina Raimondo is not a fascist or a communist. Her track record of privatization, of being a venture capitalist, of cutting state support, is not one that would endear her to communists. As for fascism, that’s even more laughable. Raimondo possesses none of the common traits of fascism,

Going into the pandemic, if asked, I would’ve definitely expressed doubt that the Raimondo administration was well-equipped to handle it. Twin disasters at DCYF and with the UHIP rollout seemed like strong signs to me that the administration would fall down. But, as far as I can tell (I’m no expert, and it’s still early days if we’re being honest) the administration has done well, certainly much better than many other more high-profile states have done.

Now, I do think there are parallels here in Rhode Island to authoritarian moves in other countries. In Israel, the prime minister shut down the courts just before his trial for embezzlement was about to begin. In Hungary, parliament voted to grant extraordinary powers to the prime minister to rule by decree and to disband itself. In Rhode Island, the courts closed and the legislature ceased to meet, leaving the governor to run the state by executive order.

But parallels do not mean things are the same. These weren’t decisions the Governor engineered to grant herself powers she doesn’t have. In an emergency, which a pandemic is, the governor has very broad powers. The Governor’s office has been sure to cite title and chapter in every executive order issued. The courts were ordered to close by the Chief Justice of the Supreme Court. The legislature refused to meet until recently even though people very publicly asked them to. And no one with a passing knowledge of Rhode Island politics would ever think that legislature was in any way beholden to the Governor.

I’m certain most Rhode Islanders share the worry that most Americans have: that we would reopen too soon, and accidentally make the pandemic worse. In fact, I worry that the Governor is too aligned with business interests to enact policies (like a rent holiday) that would really allow residents to weather the storm. We’ve seen with unemployment insurance that the State is simply not ready for nearly 200,000 people to file unemployment claims. At the start of this, it took about three weeks to get unemployment, from applying to deposit (hopefully it’s faster now). But you couldn’t really lay that at the feet of the governor, I’d guess it was like that long before she arrived. The governor’s blind spot has just always been the provision of welfare.

Meanwhile, the most quasi-totalitarian stuff has arisen spontaneously with “Knock It Off” – the gift shop Frog & Toad’s celebration of the governor’s tough mom admonition (t-shirts, beer, coffee!). Yeah, it’s a little like a cult of personality, but it’s not being used in the way an authoritarian would use it: to suppress dissent and provide cover for the undermining of democratic institutions. It’s being used to sell stuff and provide support for relief. Turns out, in trying times, Rhode Islanders find comfort in a stern Italian matriarch.

The Freedom Center really had a handful of nothing here, and it shows. Later in their press release, they reference “Cooler and Warmer”, another incident featuring artwork by a famed artist that attracted controversy. That they felt like they needed to mention it really demonstrates that they just want to attack the governor, because it doesn’t add anything to their case against Angel. They just want to make the connection: this thing was controversial, and so this other thing is too.

Let us denounce such repugnant behavior in the strongest possible terms: