Cranston is Rhode Island’s second largest city (according to Census Bureau estimates). Like a lot of West Bay municipalities, Cranston’s eastern portion is more densely populated than its western portion. Geographically, the city is bound by the Pocasset River and Route 14 on its north, a line from Route 14 down Seven Mile Road on its west, a line between a bend on the north branch of the Pawtuxet River and bend on the main Pawtuxet River before following the river down to Pawtuxet Cove on its south, and its eastern boundary with Providence is delineated by a number of streets and geographic features (Niantic Avenue, Route 10, the railroad, Route 12, Roger Williams Park, Montgomery Avenue, as well as lines across properties) until terminating at the Providence River. Interstate 295 cuts across its center north to south, and freeways like Route 2 and Route 37 also cut across it. A large state complex of many departments and offices sits in its southeastern section.

Cranston has had a pretty contentious history. The first English settler was William Arnold (his son was the first governor of Rhode Island Benedict Arnold, an ancestor of that Benedict Arnold). Arnold settled north of the Pawtuxet River, and was soon joined by others who had settled Providence a few years earlier, notably, William Harris. Some of the Pawtuxet settlers allied with Massachusetts to attempt to prevent Warwick settlers from claiming the Shawomet Purchase, though eventually they submitted to Rhode Island. Harris eventually sought to claim a massive portion of land extending from Foster to Coventry for the Pawtuxet settlers, which touched off a lifetime rivalry with Roger Williams (who wanted religious refugees to settle those areas). The dispute was settled after both men had died.

Although the settlers of Cranston were ready to split from Providence by 1660 (because of the burden of travel for official purposes), they couldn’t agree on a name (or the boundaries of the town), so it took until 1754 when they finally compromised on the name we all know it by today: Lynn… Okay, at some point in 1754, someone crossed “Lynn” off the document of incorporation and wrote in “Cranston” instead. The name change was likely in honor House Speaker Thomas Cranston, who was instrumental in its creation and gifted the then-town its first record book. This makes Cranston one of five municipalities named for contemporary politicians (along with Burrillville, Foster, Hopkinton, and Johnston).

Cranston settlement was initially farms and then small mill villages, before the Sprague family built the Cranston Print Works, and created a mid-19th century company town in the area. Later, one of the Spragues was murdered (ending his brother’s political career), and the blame was put on a family of Irish immigrants, one of whom was hanged (the last person to be executed in Rhode Island, John Gordon was posthumously pardoned by Gov. Chafee in 2011). These tensions, and the political affiliation of the immigrants in the eastern portion of Cranston eventually led Cranston’s Republican city leaders to request that Providence re-annex present-day Elmwood, South Providence, and Washington Park. This helped maintain Republican control of the State Senate, as those voters could’ve moved the seat (each municipality was represented by one senator then) from Republican to Democratic hands. The re-annexation was supported in both sections of town, and nearly half of Cranston’s population joined Providence. So ready were they to get rid of their eastern Democrats, Cranston gave up its town hall in the process.

Around six of the city’s neighborhoods developed as suburban residential areas for people working in Providence, connected by railroad or by streetcar (at one point, Cranston had to strong arm a streetcar company into building a direct route to town hall, as residents had to travel into Providence first to change routes and travel back into Cranston to attend meetings).

Probably the most RI-famous landmark is Rhodes-on-the-Pawtuxet (specifically, its “Palais du Dance” dance hall) the site of innumerable fundraisers and social events. Another famous landmark is Garden City, a 1947 planned community developed by Warwick contractor Nicholas Melocarro. Many developments in Cranston in the subsequent decades were smaller scale imitations of Garden City.

What has Cranston got now?

Like every other town, Cranston has a coat of arms.

The Tercentenary Commission describes these arms:

Gules three cranes within a border embattled argent. On a red shield three silver cranes with an embattled silver border.

Cranston was named for Governor Samuel Cranston and these are his arms.

Historical dispute about which Cranston the city was named for (c’mon, it was Thomas) aside, it’s definitely Samuel Cranston’s arms. In The General Armory of England, Scotland, Ireland, and Wales (published in 1884), Samuel Cranston (under the name “Cranstoun”) is recorded on page 240 with the above arms, which are differenced from the Lords Cranstoun of Scotland.

Cranston uses those arms, and Samuel Cranston’s motto, on its seal.

Those vertical lines are the single-color way of depicting the color red in heraldry. Someone didn’t know this, and you occasionally see a seal in color that looks like this, with blue stripes throughout the red field and a gold border: 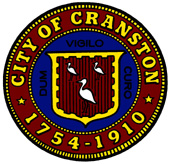 Fundamentally, it’s not a great flag, and in a lot of official applications, the features that make it identifiable are totally obscured. It just looks like anyone else’s blue flag (often, a lot like Providence’s). Cranston has a lot going for it, so it should have its own, easily identifiable flag. 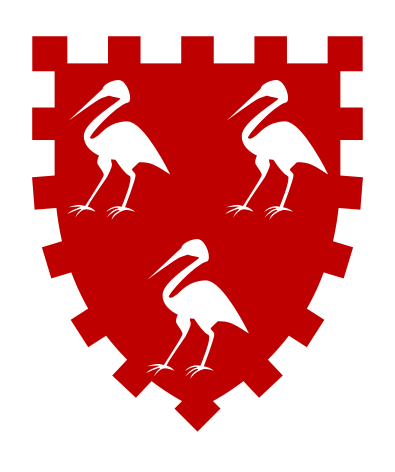 On the left you have my attempt at the arms and on the right, one using WappenWiki assets. Again, both different executions of the same concept.

Looking at the seal, it already looks like a good vectorization, but I’ve made a quick one here for using some of my already-created assets anyway. I chose Caladea as the font, as I thought it matched both the formalism of a sans-serif that a city should convey, while also being close to the font found on the flag.

I’ve also created an version of the existing flag, so we can see where we’re starting from. One of the odd details I’ve discarded from the flag is the golden strokes around everything, as it was a little weird. I was also unable to read exactly what the helmet was on the flag, so I’ve just gone with a standard tourney helm with an approximation of the mantling from .

So that’s all three existing symbols, sort of recreated. Unfortunately, beyond the coat of arms, there isn’t really much more to adapt to other flag designs. The two dates of incorporation (1754 as a town, and 1910 as a city) will have to be representing with pairing somehow, and the motto, “Dum Vigilo Curo” apparently translates to “while I watch, I care” (fun fact: US women’s national ice hockey team forward Hilary Knight has this as a tattoo). But I’m not sure how much I can symbolize that. 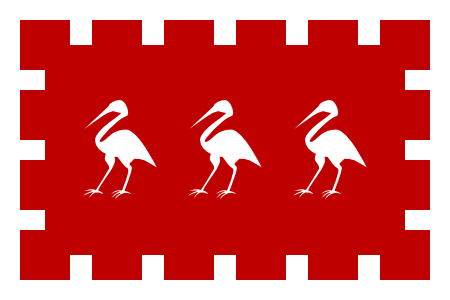 It’s pretty much standard in these posts that the simplest way to get a really solid flag for most towns will be to simply adapt their arms into the form of a flag. In Cranston’s case, they have this really lovely embattled border for the flag, and the three white cranes can be done in a straight line.

Again, that border is great. Since the town’s arms derive from Samuel Cranston, who was RI’s first governor, why not draw inspiration from the Flag of the Governor or Rhode Island and take its four stars? In that way, it also honors the governors Cranston has produced (Nehemiah Knight, William Sprague III and William Sprague IV, Henry Howard, and Edward DiPrete).

Designs 3a and 3b 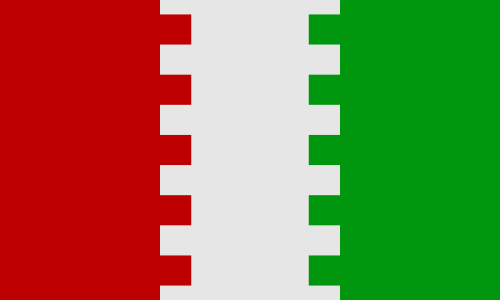 That embattled border is so good. These two tricolors represent the west vs. east conflict that has dominated and shaped the city’s history. The first flag, 3a, represents the political conflict between Republicans and Democrats (with a white band of peace between them).

3b represents the rivalry between high schools Cranston East and Cranston West using their school colors, with an off-white-but-not-quite-gray stripe in between. This way, neither high school can claim the majority of the flag.

Both flags are based on the Irish Republic’s tricolor, which is supposed to be a flag representing peace between Protestants and Catholics.

This design represents the waters of Cranston with blue, the early mills and factories with red, and the woodland and farms with green. These are roughly laid out along the city’s geography; the Pawtuxet on the south boundary, the green areas in the west, and the more urbanized areas in the northeast. The “Y” shape (called a pall in heraldry) is similar to that found on the South African flag. These colors are also some of the most common in world flags, and thus can be used to represent many of the ethnic groups in Cranston; English, French, Italian, Irish, Greeks, etc.

Cranston was very tough for me, and as always, I give the caveat that I’m not from Cranston, I’m not particularly familiar with it, and in these times of quarantine, I’m not about to get much more familiar with it. If you have ideas about what should be on a flag of Cranston, criticisms or questions, feel free to let me know in the comments or through the Contact Us page.

As always, vote in the poll: