In the southwestern corner of Kent County, Coventry is Rhode Island’s largest town by land area (like most such superlatives, the title of “largest town by area” is disputed between Coventry and South Kingstown, the latter of which claims its water area to put itself on the top).

Incorporated in 1741, the town was first settled by English settlers just a little under 100 years earlier when it was purchased from the Narragansetts by Samuel Gorton as part of the Shawomet Purchase (it encompasses Warwick, West Warwick, and Coventry; essentially Warwick and its further divisions). Apparently, as the area that became Coventry was settled more, it became onerous to travel the 20-odd miles into town for government business, and in 1741, the Rhode Island General Assembly granted a petition allowing the town to incorporate. It was named Coventry after the English city, and became RI’s 16th town.

Like many of the towns of Rhode Island, Coventry grew around a set of mill villages, often with company housing (Coventry may have the most, Wikipedia lists 16). According to a 1973 publication by the RI Historical Preservation Commission, three of these villages (Washington, Anthony, and Quidnick) essentially had their main streets united along the Flat River Road (Rt. 117). Most of the town’s settlement is in its eastern portion.

Though as best I can tell, he only spent maybe six years or so of his life (and neither was born, grew up, died, or was even buried there) in the town, Revolutionary War general Nathanael Greene is, in true Rhode Island fashioned, claimed as the most famous Coventrian – his homestead is there. A very distant second is Henry B. Anthony, arguably the first U.S. Senate Majority Leader, and a nativist Republican politician and publisher that the Providence Journal once paid to travel around Europe and report how awful things were there (the more things change, etc., etc.).

Coventry is estimated to have slightly less than 35,000 residents. The Town is sisters with the English city it derives its name from.

What has Coventry got now?

Coventry is among the Rhode Island towns that has adopted its coat of arms. And it’s a rather unique set of arms, leaving many people who gaze up at the ceiling of the Veterans Memorial Auditorium asking the same question: what’s up with that elephant?

The Tercentenary Commission describes the arms:

So, why the elephant? Because the arms of the English Coventry are that. Rhode Islander Coventry altered them just a bit (they changed the division of the field).

Okay, but why does Coventry, England have an elephant? Well, because of some complicated Christian symbolism. You can look at the Town of Coventry’s explanation, or you can read their uncredited source, the City of Coventry (it’s a word-for-word lifting, the kind that would get you a failing grade and a stern talking-to in any high school).

Coventry incorporated these arms into the town seal:

As seals go, perfectly fine seal, thirteen stars for the thirteen states, similar to RI. Name, state, incorporation date. Nothing too extraordinary, though not too difficult to forge. There’s a weird bit where the red from the top half of the shield cuts down into the green of the bottom half, and that’s not the best silhouette of an elephant ever, but hey, they’re using their arms. In fact, even the Coventry Police Department uses the arms (or an adaptation of them).

Coventry’s flag is a seal on a bedsheet.

This is sort of the story of Rhode Island municipal flags; even if there’s a solid starting point (the arms) the trappings of the rest of American civic symbolism press in, turning what should be a simple adaptation of arms into a bland, uninspiring, indistinct flag. The arms are the strongest part of this flag, and they need to be brought forward.

Starting with the arms, it’s pretty simple to make a new elephant. At left, you can see my most recent attempt, and at right you can see one using WappenWiki assets. I’ve used an African elephant, it looks like WappenWiki uses an Asian elephant. As I always stress, both are valid, they’re just different executions of the same design. Technically, because the emblazonment (the description of the arms) is so vague, you could probably separate the elephant and the castle and still had a valid set of arms. 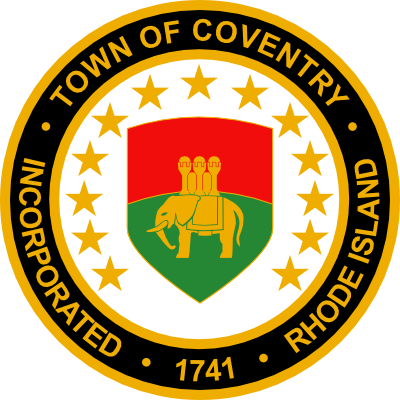 You can see my much older attempt at recreating the arms from the Bowditch drawing on it.

And if we have the seal, we have a flag:

If I do nothing else today, let me impress upon you that this design should be Coventry’s flag already. Red and green bicolor, with a gold elephant and castle in the center. This is as simple an adaptation of the arms as you can get. If Coventry does nothing else, it should do this. 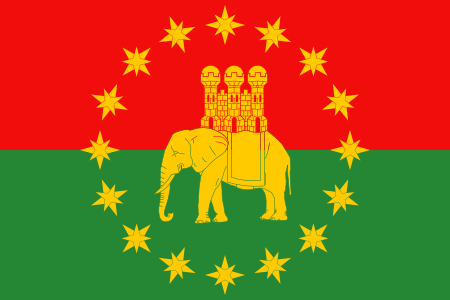 However, we can go a step further. On its seal, Coventry uses a broken ring of 13 stars. What if we use a ring of 16 stars, representing the 16 villages, and Coventry’s position as the 16th town in Rhode Island. I’ve added a bit more symbolism here by making these eight-point stars based on the symbol of Quaker service organizations as a way to symbolize Nathanael Greene, who was initially a Quaker (until he was suspended in 1773). The ring of stars also draws a connection with the popular version of the first flag of the United States.

Alternatively, we can step a bit farther away from the arms, and use Greene symbolism in another way. The arms of the Greene family are three stags passant (walking slowly) on a blue background. The Deer and Castle Flag uses a white-tailed deer in place of the elephant for a symbol that symbolically a bit more resonant.

Just as an aside, when using animals in flag design, the advice is to point the animal towards the left/hoist side of the flag, so that when borne forward, the animal will appear to be moving in the direction of the bearer, rather than backing up or running away.

These three flags, with Design 2a as the starting point, are roughly forms of Coventry’s geography; the green representing the western, more rural woodland areas, the wide blue diagonal stripe representing the Flat River, and the red representing the mills and the more built-up eastern areas. For heraldic reasons, the blue stripe is fimbriated (outlined) in gold, which can stand for the town’s prosperity. Design 2b uses 16 stars for Coventry’s order of incorporation and number of villages, and Design 2c uses the three stags from the Greene arms.

Another option is to draw a visual connection between the arms of Coventry and the arms of Warwick. I won’t get to Warwick until October, but the right portion of Design 3a uses a section of the Warwick arms (the part directly referencing the Duke of Warwick). The left uses Coventry’s elephant and castle. This creates a nice visual connection with the Town’s past, while also geographically locating Coventry to Warwick’s west. Coventry, symbolized by its elephant, meanwhile looks to its future, leaving Warwick behind it.

Design 3b uses the Quaker stars in place of the crosses.

Finally, Design 4 here uses the black from the town seal as a center stripe to make a tricolor design, while using the 16 Quaker stars as fimbriation between the stripes.

There was a very vocal and clear complaint from a Charlestowner that I was overly-reliant on monarchical symbolism, which was definitely true. There were also suggestions that I make a flag bearing five fishes, which I neglected to do last week because I was sick of fish. Below are some further Charlestown designs, with a hopefully more little-r republican bent. In honor of Joseph Staunton, I’ve added the Phrygian or liberty cap from the Seal of the United States Senate in a couple of the designs.

As always, I’m not from Coventry, and if I was overseeing a municipal flag redesign for real, I wouldn’t do it this way. These are just possibilities, to show what can happen if you think about flag design a bit more than “put our seal on a one-color background”, and how much better municipal flag design could be.

As always, vote in the poll below, and use the contact form to get in touch (or comment) if you have an opinion you want to share.

Next week, I’m on to Cranston!