A long while ago, I talked about how Rhode Island has, for the most part, awful municipal flags. I did a talk expanding about that subject at a Providence PechaKucha a while ago. And I set a personal goal to create new and interesting flag designs for each of Rhode Island’s 39 cities and towns.

…and then I let that fall by the wayside.

But not anymore! So today, I present the first in a weekly, 39-part series on updating the flags of the municipalities of Rhode Island.

I’m going in alphabetical order so our first stop is Barrington!

What has Barrington got now?

According to the CRW Flags of the World website (a sort flag encyclopedia started in the 1990s with a web design that shows it), Barrington’s flag is this:

Where does that sword come from? According to the Rhode Island Tercentenary Commission (which had all the towns adopt coats of arms in 1936), Barrington also has a coat of arms; it’s described thusly:

Gules a sword palewise argent hilted or. On a red field in a vertical position a silver sword with a gold hilt.
The sword symbolizes Barrington’s part in the American Revolution.

And here’s the image from plate found in the Providence Archives (you can also find it in the State Archives):

Meanwhile, the Town of Barrington webpage and the town Twitter account use this seal, which contains the coat of arms:

The first thing we can learn from this is that there is no agreement in the sources on what the town arms are (or supposed to be) or the town flag. This is actually really common. These things get adopted, the town forgets about them. Maybe Barrington adopted arms with a yellow field, or maybe over time, on some image, red faded to yellow and someone erroneously assumed that was the color it was supposed to be,

So we’ve got these three pieces of a town’s identity: a flag, a coat of arms, and a seal. Let me define what all of these are. If you think this is a basic thing, that’s true, but people absolutely use these interchangeably all the time. These are my definitions.

So, each of these is supposed to do different things. The coat of arms is the most adaptable, and in fact, is easily adapted into either a seal or flag (as Barrington kind of shows). As an aside, when we get to Little Compton, we’ll talk about how not to adapt arms into flags.

The problem, for municipal and state flags in the United States, is that seals are very often adapted directly into flags. So, you get things like the flag of Nebraska. And this is a problem in flag design, because seals are meant to be examined up close. Where do you see flags? Carried, on flagpoles, or on ships. You are not supposed to stop and take time to examine the flag to make sure that, yep, just like real flag of Nebraska, this one has the train going towards left. 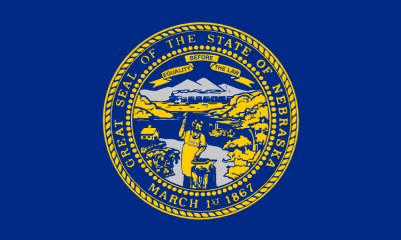 Which one is the real Nebraska?

Luckily, as far as I know, Barrington doesn’t do this. The seal exists, the flag exists, and the flag is not just a seal on piece of white or blue fabric.

So, let’s bring the purported current flag of Barrington into the 21st century, and create a digital, vector version of it: 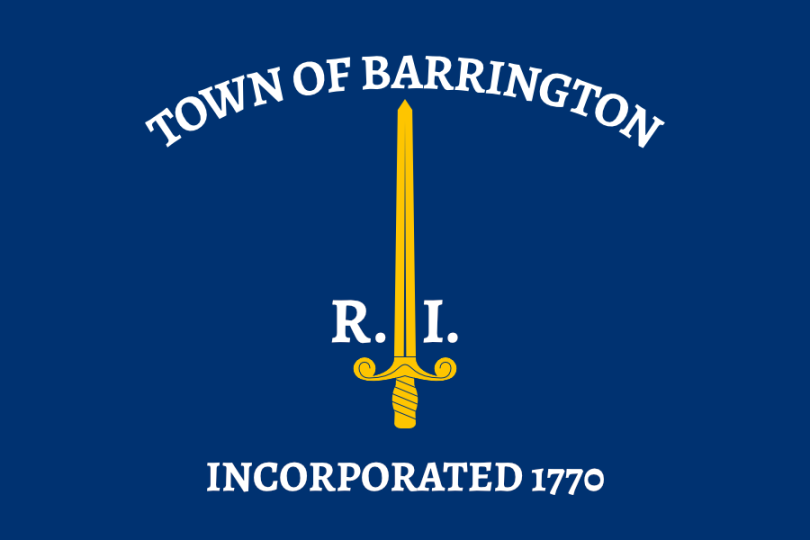 That gold stuff along the edges in the photo is fringe, and it’s not typically part of the actual design, so I’m not including here. It’s not a great design. Again, flags are meant to be quickly identified at a distance, and while a gold sword isn’t that bad, the text isn’t great. What if it said “Town of Borrington, P. I., Incarcerated 1970” instead up there? How long would it take people to notice? You also have to print it double sided so that the text reads the right way on the reverse side, which will increase costs. That’s why, within the flag design community, a general rule of thumb is to avoid text on flags.

Let’s also do the arms. And there, we have options. 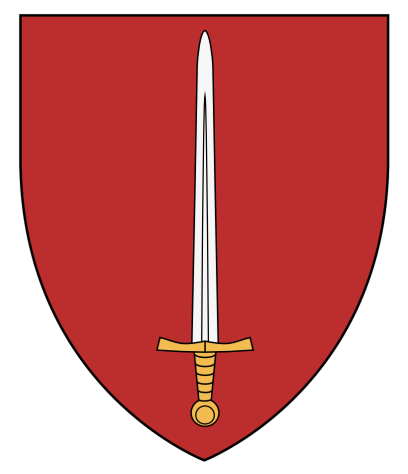 Drawing from the Tercentenary Commission, which is the whole reason towns have coats of arms in the first place, the arms of Barrington are a gold-hilted, silver sword on a red background. So, at left is a simple vector design I did based off of the Tercentenary illustration. At right is a set of vectors taken from WappenWiki, which is a wonderful resource of vector images of coats of arms from around the world.

These are different executions of the same thing, but in my view, the one I used WappenWiki assets for is better than my efforts. Still, for a lot of applications, I wouldn’t actually use something with that much detailing, especially if I want my design reproduced faithfully.

I think you can redo Barrington’s flag pretty easily, without sacrificing much other than the text, which is unnecessary anyway. (As former president of the North American Vexilogical Association Ted Kaye says on Roman Mars’ 99% Invisible podcast/TedTalk, “if you need the name of what you’re representing on your flag, your symbolism has failed.”)

So I want to present a few different designs, that are fairly simple adaptations of the arms.

The simplest thing to do is just to do a basic adaptation of the arms without doing anything more. It’s a sword on red. In my opinion, it’s a pretty good flag just like that, though it’s pretty warlike, and perhaps not reflective of the modern Barrington.

Why is the sword sideways instead of vertical? Well, as you’ll see from some designs below, because flags tend to be wider than they are tall, the sword shrinks down, leaving a lot of negative space if it’s vertical. Plus, when this flag is hanging so it is vertical or from an angled flag pole, it will look like the sword is pointed up.

I’ve gone to an entirely white sword, because at a distance in sunlight, white and yellow can be hard to distinguish, and it may be hard to remember whether the blade is yellow or the hilt is. Plus, cost savings on color. This makes it a bit simpler to remember and reproduce.

The sword is shifted to the left of the flag and not centered for a reason. That side is called the “hoist” and it’s where the flag is raised. In low wind conditions, it’s the most visible part of the flag. It’s also the part of the flag that wears out last. The right side, the “fly,” is loose in the wind, and wears out first. By shifting the sword over to the hoist, the lifespan of a flag can be increased, as you simply need to hem the fly side when it become raggedy. When the flag gets too short, you then replace it.

As above, but the end of the flag has been cut so that the whole flag resembles the shape of a “B” for Barrington. While I like this for its relatively simplicity and as a very unique flag shape, it will be more expensive. First, because it has to be cut, that will increase production costs. Second, because it has two loose flaps on the fly, these will wear out even faster, and possibly split the flag down the middle. So flags will have to be replaced more often.

If someone was to go with this sort of design, I’d recommend they only adopt it for official use in a few places, like indoors or in front of Town Hall, and use a more traditional rectangular flag elsewhere. 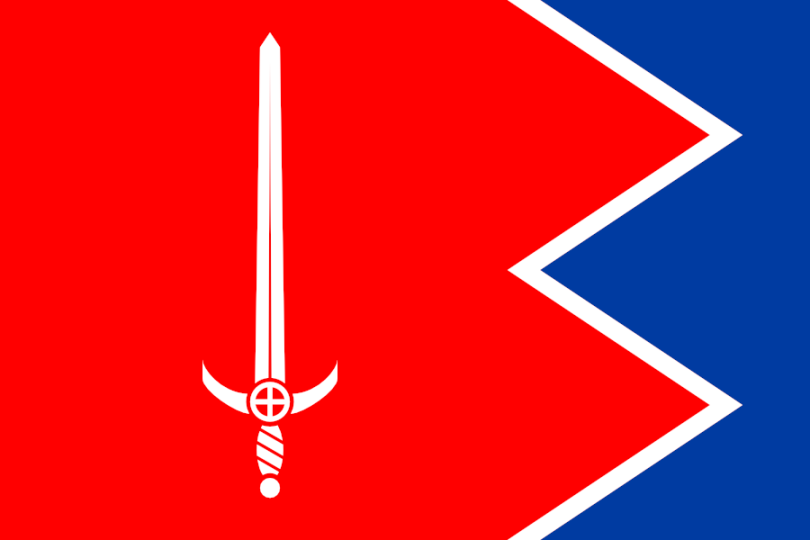 Working along the red, white and blue lines as above, this design keeps much of the red of the arms, while also using the blue of the flag. The geometry here has meaning; the two red spikes represent Barrington’s two peninsulas, while the three blue spikes combining represent the Providence, Barrington, and Warren Rivers joining in the Narragansett Bay. Around the world, flags don’t do this sort of division of the field much, meaning this will be a very distinctive flag.

This is a simple blue and white triband (a version of the tricolor where both the hoist and fly colors are the same) design with the center stripe charged with the town arms. It’s not too busy though still bears the coat of arms. You can always remove those to simplify this flag further (making it just a plain blue and white triband), and then use the version with the arms as a government ensign reserved only for officials’ to use.

That’s it from me for Barrington, but I’m always open to suggestions or feedback. I’m not a Barringtonian, so I don’t have much of a feel for the town. Maybe you live or work there, and you think it’s more important to have some symbolism representing something(s) else on Barrington’s flag. Maybe you think the current flag is great. Maybe you have a design of your own. Maybe you’re from the Town of Barrington and this intrigues you (only 16 years to go until the Rhode Island quadricentenary).

You can use the Contact Us page to send me an email (I do read them all, even if I don’t always find them actionable). I’d love to hear from you.