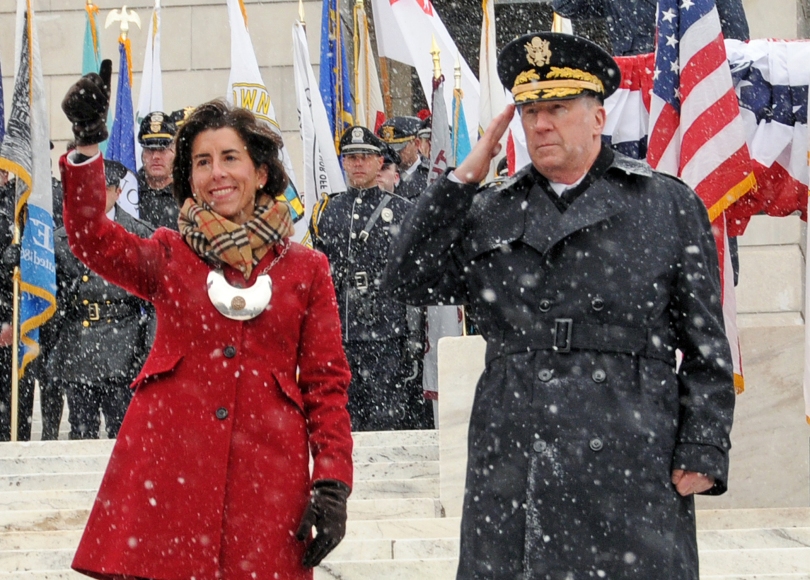 Former Rep. Joe Trillo’s announcement on WPRO that he would run for governor as an independent rather than a Republican triggered both Democratic glee and Republican anger. But some weren’t so sure:

Lots of insta-analysis saying Trillo’s indy run is good for Raimondo, and there’s a case – but after the 2016 presidential race, worth being a bit cautious about how events will play out https://t.co/bNxhmzqHJz

Trump’s place as America’s “Mule” remains a jarring shock, but I think Nesi is over-correcting here. While there are likely to be parallels between the 2016 U.S. presidential race and the 2018 R.I. gubernatorial race there’s only one currently established: a Democratic nominee that is fairly unpopular with the broad public.

Trillo abandoning the Republican label actually reduces the parallel here; Trump may have flirted with running as independent had he lost the GOP primary (though that would’ve been difficult thanks to many states’ sore-loser laws) but Trillo is running as an independent from the outset. Combined with upset Republicans over his perceived betrayal, and that’s going to limit his ability to get coverage during the run-up to the September primaries, and it’s going to limit his ability to fundraise from his Republican base.

Though Trillo is an unabashed Trumpist, there are good reasons to be skeptical that he can mimic Trump at the state level. As an independent, Trillo will completely lack any assistance from a party organization, and small though it is, the Rhode Island Republican Party absolutely retains value to its candidates in terms of association and at least press support.

Trillo is unlikely to be able to make up for the loss. His most recent general election campaign was in 2002, and he abandoned his seat (House District 24) when faced with his first challenger in 14 years in 2016. There is no evidence he is an energetic campaigner; and certainly nothing to suggest he is a social media dynamo capable of going around the press to reach the public as Trump did throughout 2016.

Furthermore, 2018 is shaping up to be a wave year for Democrats as they rally against the President, and Trillo’s close embrace of the extraordinarily unpopular Trump is a liability in a general election. Plus, the Governor will be an incumbent, a powerful advantage that shouldn’t be ignored.1

Trillo’s crossover-appeal seems limited. Trump certainly picked up some voters who voted for Obama, but he only a did a few percentage points better than Romney and McCain, and was on par with Bush in 2004. If his goal is to pick up disaffected DeLorenzo Democrats frightened of the party’s progressive wing, he needs to convince them that keeping Raimondo in to hold back the progressives is untenable. He has also anointed himself as capable of appealing to small-m moderates who want “radical change” (the oxymoron is apparently lost on Trillo). He also makes the classic pundit’s mistake of going after unaffiliated voters, ignoring that most such voters are actually quite partisan. Looming over all of this is the lesson of Lincoln Chafee, our last independent governor.

The clearest beneficiary of Trillo abandoning the Republicans undoubtedly is Gov. Raimondo. Trillo threatens to pull more votes from the eventual Republican nominee than the Democratic nominee, and in year when Republicans are likely to be demoralized by their flailing president and Democrats energized to turn out.

The other person who gets an advantage from Trillo is likely to be Patricia Morgan, who (barring a possible run by Giovanni Feroce) now has the chance to make the Republican primary a one-on-one match up against Alan Fung. Fung’s worse-than-expected primary win in 2014 against former Moderate Party founder (and confessed Obama voter) Ken Block rested on his margin of victory in Cranston. Within the Republican party, Trillo theoretically could’ve negated that with a similar margin in Warwick, but now it leaves it Warwick open for Morgan to try to pick up (though Fung could also benefit).2 Fung’s weakness in the last GOP primary is probably what’s lead to his inability to clear the field for 2018.

Actually the weakness of the presumed major party candidates is worth talking about here. Though early yet, that so many candidates are jumping in or flirting with running for the Republican nomination means two things: that they think Raimondo can be beaten, and that they think they can beat Fung.

A few other things to keep your eye out for to further complicate this race: the Moderate Party still has a ballot line that can be occupied, the emergence of a NEARI-backed challenger to Raimondo, and Chafee getting in the race. It’s possible those could all be one and the same, but any will cause an already fascinating election year to grow even more interesting.

1. The Center on the American Governor at Rutgers New Brunswick estimates nearly 80% of incumbent governors from 1980-2013 won re-election when they sought it. ↵

2. Former House Minority Leader Brian Newberry has suggested that the seven-town area of Lincoln, Smithfield, North Smithfield, Burrilville, Glocester, Foster, and Scituate are collectively nearly as valuable in a Republican primary as Cranston, but I think this ignores population density and road infrastructure which makes campaigning in Warwick and Cranston much more cost-effective than in Northwestern Rhode Island. ↵