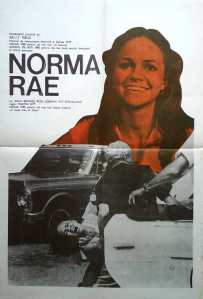 Last month’s 87th Academy Awards was filled with memorable moments. One of those that stood out to me was an acceptance speech given by Boyhood (2014) actress Patricia Arquette. In the film, she plays a strong independent mother of two who goes through a series of peaks and valleys with different men. Arquette obviously viewed the role from a feminist standpoint, using the Oscar air time to raise her voice about wage equality for women. Meryl Streep even cheered on what host Neil Patrick Harris later referred to the Patricia Arquette’s “Norma Rae moment.”

This got me thinking about the legacy of Martin Ritt’s 1979 film and how it was time for me to sit down and finally watch it  — How could I call myself a good feminist without seeing this particular piece of cinema history? — Thankfully Norma Rae was easy to track down, since it was released on Blu-ray last year. Thirty Five years later, and Sally Field’s Oscar-winning performance is even more important today in the feminist rally cry for basic human rights!

Field plays the titular character, a southern textile worker who fights back against the patriarchy of 1978 North Carolina. Norma Rae Webster is a widow with two children, living with her parents, trying to make ends meet. Hope comes in the form of a labor union organizer named Reuben Warshowsky (Ron Leibman) from New York City. He soon sees the exploitation of the town’s factory/garment workers, but his voice falls on deaf ears. Being a Jewish man, he is met with a cold shoulder at first, but soon is befriended by Norma Rae. Eventually, they will team up to for a cause much bigger than individual hatreds or bigotry: a labor union for the O.P. Henley Textile Mill. 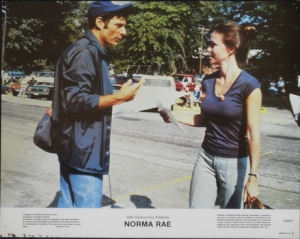 Martin Ritt’s film is pretty straightforward, but it should not be disregarded for being a Hollywood formula story. Irving Revetch and Harriet Frank Jr.’s screenplay was one of the first of it’s kind, a woman who rises up to confront an unfair system and win a victory for the underdog. Erin Brockovich (2000) would follow the same formula and win an Academy Award for Julia Roberts at the turn of the new Millennium. Norma Rae laid the feminist groundwork for what would become an Academy tradition of Oscar-winning films based on true events.

Apart from Sally Field’s performance, Norma Rae hit me on a very personal level. For one thing, my great-grandmother worked in a mill long before the events depicted in this film. She developed hearing problems in her old age from what I can only imagine were intolerable conditions of her job in the factory. When Sally Field’s character says to her children that she is standing up for the workers union to give them a better life, all I could think of was my family through the generations.

They had a responsibility to work hard to provide for their families. Moreover, I have a responsibility to my readers to bring about the awareness of equal employment and gender equality, through film criticism. These are issues I feel very strongly about. Conversely these are the same issues the patriarchy is trying to whitewash with their own “values”: greed, sexism and the big c, capitalism.

In Norma Rae’s mill the women are lumped in with other minorities such as African-Americans and the elderly. They are all manipulated by white males in power so these businessmen can retain their social status. Is the O.P. Henley Textile Mill a small example of what is happening to America in 2015 on a larger scale? Yes, only today there are many more unions and women have a greater opportunity for social mobility.

The battle isn’t over by a long shot though. Women are still fighting to be heard. The “glass ceiling” still exists and women are still paid less than men for doing the same work. That’s if you’re white. Female minorities have to overcompensate for both their race and their gender. On the positive side, today the spirit of Norma Rae lives on in a new form.

Male feminists are now picking up the banner of equality with the HeForShe Campaign. Harry Potter superstar Emma Watson has even spoken on behalf of this group at the United Nations. This is “a solidarity movement for gender equality that brings together one half of humanity in support of the other half of humanity, for the benefit of all.” Norma Rae’s inspired tale has evolved into something that is now more inclusive and welcoming.

Feminism in the 1970’s was a dirty word. The phrase was misunderstood because the public’s focus was too narrow. But, with awareness comes action. With action comes change. In 2015, we are beginning to see that all our voices can be one voice. United we are strong: black, white, women, homosexuals, transgendered persons, everyone. No matter who you are, if you are a progressive thinker, you should see Norma Rae.

This Sunday 8th 2015, National Women’s Day, check out a film which was a giant leap forward for feminism and the solidarity of workers alike.