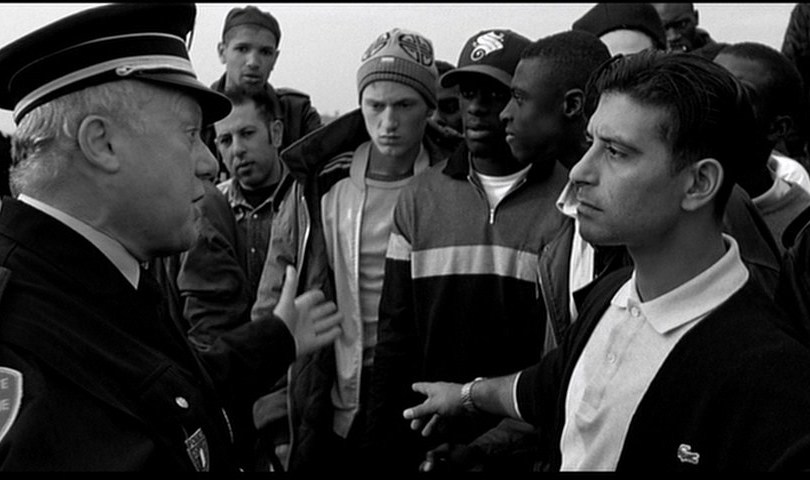 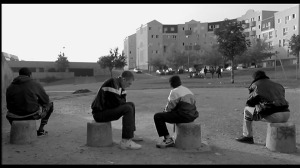 The Ferguson, Missouri shooting and “Je suis Charlie”, have given me a reason to revisit a particular film and revaluate it with more contemporary sensibilities. I chose La Haine (1995) – a crime drama about disenfranchised youth living in housing projects outside Paris, France – because it assaults the viewer with the harsh reality of the streets: crime, poverty, racism and police brutality. Hate (English translation) shows the faces in a struggle and humanizes groups of people that are often downgraded to cultural stereotypes.

This was my second time watching the film after a few years and La Haine has lost none of its initial power! I had first discovered it through The Criterion Collection.

Mathieu Kassovitz’s film is a day-in-the-life of three friends: Saïd (Saïd Taghmaouiis of Three Kings and American Hustle) is an Arab, Hubert (Hubert Koundé from The Constant Gardener) is black and Vinz (Vincent Cassel from Irreversible) is a white, non- practicing Jew. A buddy of theirs named Abdel was put into a coma by the police prior to a large riot. Vinz finds a cop’s gun during the riot and vows to Saïd and Hubert that he will murder a police officer if Abdel dies.

Vinz is obviously the tough-guy of the group – or thinks he is, anyway. He represents the common ‘kill or be killed’ attitude of lower-income areas with high crime. He believes that intimidating someone with a weapon is the same thing as being a man of action. Either that, or he sees no escape from his socioeconomic predicament and wants to go down in flames. For Vinz, life is nasty, brutish and short and he wants to make his mark while he is still around.

Unfortunately, Vinz does not believe he can rise above his social standing, improving his life in a more positive fashion. Positivity is hard to come by in the projects, as the hood is a circle of entrapment. To borrow the words of RZA – rap superstar and co- founder of the Wu-Tang Clan:

In La Haine, our main characters adapt street smarts as a defense mechanism. The poor are forced to play an unfair game where the deck is always stacked against them. Painful awareness of a power imbalance causes feelings of bitterness, resentment and hatred against symbols of authority – the police for instance.

Studies have shown that lower-income areas have less access to the opportunities of more privileged ones, the most crucial being education. Proper schooling is a tremendous factor which determines the kinds of jobs young people are qualified for. Without the diploma – provided that you can find work – the wages are not enough to support a family household, either.

The aforementioned circumstances push young people into selling narcotics – or other lucrative illegal activities – to help keep a roof over their family’s head. Hubert has to do something to support a single mother, sister and a brother who is serving time in jail. Even though he is trying to help out his loved ones, his actions still put him on the wrong end of the law. It’s a catch 22.

Hubert is an aggressive type like Vinz, but he tries to channel that into a positive sport, boxing. Unfortunately his gymnasium gets burned down as a result of a police riot. He becomes a victim of circumstance and his opportunity to better himself has literally been burned to the ground. Fuming mad, he takes it out on his punching bag.

Saïd is played nicely as a person caught between the more rational Hubert and the impulsive Vinz. All three of them butt heads with a specific cop, but he is on the level and wants to look out for them. He even springs Saïd from jail at one point in the film. This policeman is trying to set a positive example for law enforcement, showing the protagonists that not all cops are out to hurt them with riot shields and clubs.

The real crux of the problem between police and the denizens of the projects seems to be when both sides perpetuate their own stereotypes. Hubert and Saïd think Vinz’s attitude toward the police is too extreme…until they are arrested by racist cops in Paris later in the film. Vinz’s pals are handcuffed to chairs, beaten and humiliated. And learning in the hood, that you fight fire with fire to gain respect, the youths therefore become more aggressive/violent toward people in power (authority). 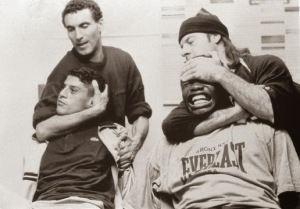 In La Haine, there is a nice balance, showing the errors of both sides in a power struggle. Like anything else, it is all about perception. If I had to compare this film to anything I would say La Haine reminded me of something Spike Lee would have made, had he been born in France. The gravity of their situation is represented on the faces, in the eyes, of leads like Vincent Cassel. The camera moves are fluid and ease us into the more intense close-ups. Think a French Do the Right Thing (1989) in Black and White and you’re not far off the mark.

For anyone out here who doesn’t care for foreign films with subtitles…I can assure you that La Haine will not bore you! The film is fast-moving, entertaining and provocative. It avoids being preachy while making a strong point about how seeds of hatred are planted.