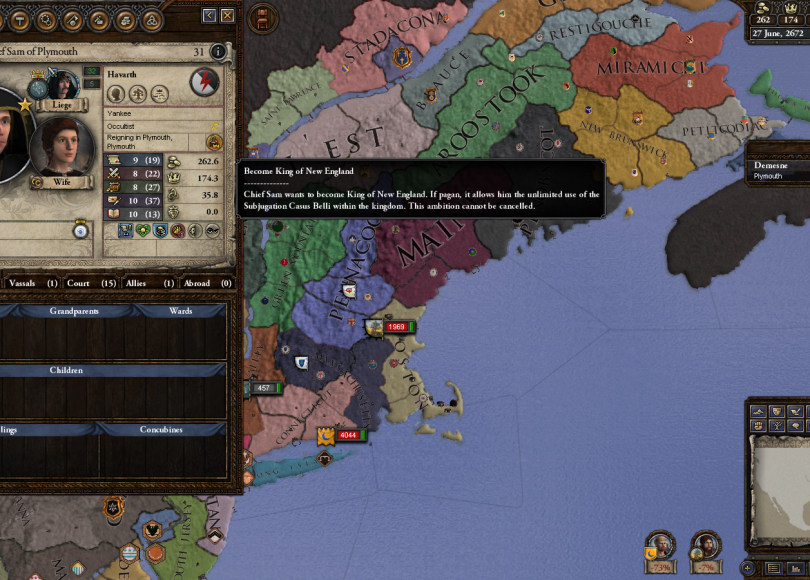 Crusader Kings II remains my all-time favorite game. Part of it is the love I had for a Mac version of its predecessor, which was one of the few games I could actually play on my Mac laptop. Another part is that the core game is wonderful, almost always allowing me to carve out a new history, be it a Viking-ruled Egypt to an England where the Welsh drive out the Saxon invaders (more ambitious ones have set up an Muslim Emirate in Ireland and created a Carpathian Avar empire). But in large part, what keeps the fun in the game for me is the wonderful collection of mods available.

For my less computer-literate readers, “mod” is short for “modification” and many games have a vibrant community of modders (people who make mods) that work to alter the game in ways they fine appealing. These can be cosmetic changes such as swapping fonts or changing the way information is displayed or these can be big changes to the point that an entirely new game is created. Some mods do graphical overhauls to the point that they vastly improve on the original.

Different developers encourage or restrict modding in certain ways, but Paradox Interactive (the makers of Crusader Kings) have been very supportive of their modding community, occasionally incorporating the best ideas into new features available in the game (the Game of Thrones mod is perhaps the best computer game version of the series available). And so they themselves spotlighted a new mod entitled “After the End” on their Facebook and Twitter. And then I downloaded and played it.

The quick setup: after an unknown “event” destroyed society, the North American world has reorganized itself and reverted to a feudalistic nature. Because the mod is new, only the east coast is available to play, from the Maritimes in Canada to the islands of the Caribbean Sea. So, naturally, I set myself up as close to Providence as possible.

Unfortunately, things didn’t go so well for Chief Sam, whose attempts to conquer Boston ended in stalemates both times, forestalling any chance he had of making himself the King of New England. And then his liege-lord’s inability to defend himself got him locked in jail in New York City, where he ended his days.

There’s plenty of interesting things in After the End to keep you interested. The mod creators have done a good job throwing jokes into the ruins of society, where the King of Michigan is known as the “Tycoon” and where a group of Atom worshippers down in Florida call themselves the “Tribe of the Mouse”.

Where I think the mod needs to go is building up some level of lore, and crafting new events for the post-apocalyptic scenario they’ve created. Right now, it feels as though it’s just medieval things grafted onto the North American continent. A new set of events would help people really get into the setting, and something that might ground the world in some level of familiarity would be helpful. I didn’t understand why Rhode Island, the most Catholic state in the Union, is projected to be overrun by pagan occultists, but the American Papacy is in St. Louis. They weren’t even Lovecraftian occultists!

The feeling I always want from these post-apocalyptic settings is that sense of the barbarians sitting in Rome after it was sacked, pondering what their next move is. While “After the End” is outside the gates, but it has burned the city yet.